Name the Different Layers of the OSI Model?

Subscribe to my newsletter and never miss my upcoming articles

Name the Different Layers of the OSI Model?

What Does the OSI Model Mean?

The Open Systems Interconnection (OSI) model is a seven-layer model that describes how computers communicate via the Internet. In the early 1980s, it was the first standard model for network communications, and it was adopted by all primary computer and telecommunications businesses.

The current Internet is built on the TCP/IP paradigm rather than the OSI model. The OSI 7-layer model, on the other hand, is still extensively used since it helps to see and communicate how networks work and isolate and diagnose networking issues. OSI was started in 1983 by people from some of the most extensive computer and telecommunications companies. In 1984, ISO made it an international standard. The seven layers of the OSI model: 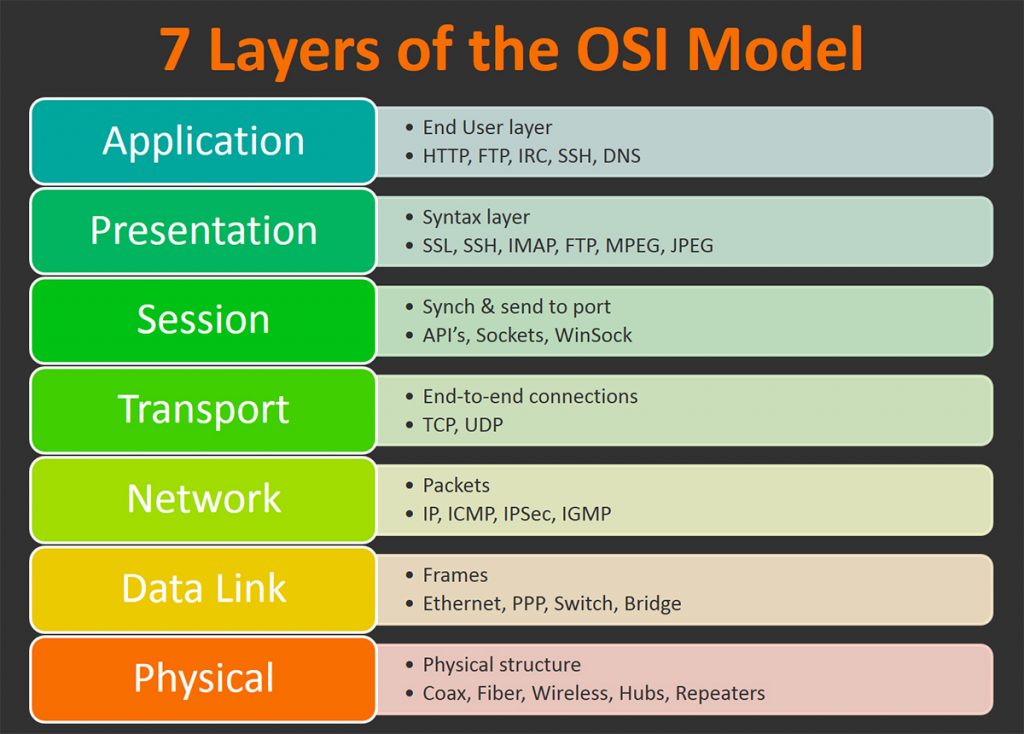 From the application layer, which directly serves the end-user, to the physical layer, we'll describe the OSI layers as "top down."

The Desktop Layer is also known as the Application Layer. The functions of the application layer are:

For example, ASCII to EBCDIC translation.

Compression: This technique reduces the amount of data that must be transferred over the network.

The session layer establishes communication channels, often known as sessions, between devices. It is responsible for initiating sessions, maintaining their functionality while data is sent, and closing them when the connection is complete. During a data transfer, the session layer can also set checkpoints so that devices can pick up where they left off if the session ends.

The transport layer receives the data sent by the session layer and divides it into "segments" on the receiving end. It is responsible for reassembling the segments and transforming them back into data that the session layer may use. The transport layer is in charge of flow control, which means sending data at a rate that matches the connection speed of the receiving device, and error control, which means checking to see if the data was sent correctly and sending it again if it wasn't.

The network layer serves two functions. One way is splitting segments into network packets and reassembling them on the receiving end. Alternatively, packages can be routed through a physical network by calculating the best path. The layer uses network addresses, usually Internet Protocol addresses, to send packets to the nodes where they need to go.

The data connection layer is in charge of node-to-node message transmission. This layer's primary job is to ensure that data transfers from one node to another through the physical layer are error-free. When a packet is on a network, DLL is responsible for transmitting it to the host using the packet's MAC address.

The Data Link Layer is split into two parts:

Depending on the frame size of the NIC, the packet received from the network layer is further broken into frames (Network Interface Card). The MAC addresses of the sender and receiver are likewise included in the header of the DLL. The MAC address of the receiver is retrieved by sending an ARP (Address Resolution Protocol) request across the wire with the question, "Who owns that IP address?" The MAC address of the target host will be returned.

The Data Link layer has the following functions: Framing is a data connection layer function. It allows a sender to deliver a collection of relevant bits to a recipient. Attaching unique bit patterns to the frame's beginning and end accomplishes this.

Flow Control: Because the data rate on both sides must be consistent or the data may be corrupted, flow control coordinates the amount of data that may be transferred before the acknowledgment.

When many devices share a single communication channel, the data link layer's MAC sub-layer assists in determining which device has control over the track at any particular time.

The physical layer is the OSI reference model's lowest and most fundamental layer. It is responsible for the physical connection between devices to permit communication. Within the physical layer, bits are utilized to store information. It is responsible for transmitting individual bits from one network node to the next. This layer receives the incoming signal, converts it into 0s and 1s, and sends it to the Data Link layer when data is received. The Data Link layer will then use the 0s and 1s it receives to put the frame back together.

The physical layer is responsible for the following functions: